In early March 2011 a pair of Pink-necked Green Pigeons (Treron vernans) built their nest in my curry-leaf tree (Murraya koenigii) (below left). The old tree has been heavily trimmed and overgrown with a luffa (Luffa aegyptica) climber that used to literally cover the crown, suppressing the tree’s leaf growth. (Note the luffa fruit, partially seen towards the right corner of the image.) This provides excellent camouflage for the nest. Looking from the base of the tree, the nest looks like a mass of dried leaves, even though the long tail of the incubating bird juts out prominently. The incubating bird seldom moves and this again makes detection difficult. Only during the mornings (around 8am) when the male arrives to begin his incubating duty, and evenings (around 6.30pm) when the female returns to relieve the male, that you detect movements around the nest.

On the morning of 17th March, an eggshell was found below the nest, indicating that one chick has hatched either. On the same evening another eggshell was seen, also below the nest. The second chick possibly hatched within less than 24 hours of the first. Although a complete set of shell of the first egg was picked up, only part of the shell of the second egg was located (above right). Usually among birds that nest in the open, the eggshells are removed and deposited some distance away so as not to leave any evidence of the nest location. This has been documented in Peaceful Dove (Geopelia striata). Apparently the Pink-necked Green Pigeon does not do that (or not in this case). One possible reason can be that both parents are always in the nest, leaving only twice a day at shift change, or when predators lurk nearby. There is also no need for egg camouflage, thus they are white, as seen in bee-eaters, kingfishers, woodpeckers… that nest inside cavities.

On the 19th morning, the nest was empty, with most of the material gone (above left). Obviously the nest was raided by a squirrel that was seen loitering around the tree the evening before. At about 8.10 am the male arrived at the nest looking as the damaged nest – his mate and young chicks gone (above right). He left about five minutes later.

This is another case of failed nesting in birds… despite various precautions. 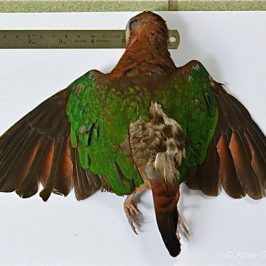 “I was this golf course-resort to watch some birds when I spotted this dead Emerald... 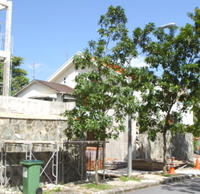