“I have a pair of resident Collared Kingfishers (Todiramphus chloris) at my place (above left). I have done nothing to attract them, aside from being situate across from a field where I have seen them dive into the grass for food (can’t quite see exactly what they caught). I see them almost everyday for quite a few months now, and have been observing them. I am curious about two things:

1. Why they adopt an ‘angel’ pose at times when perched (instead of wings folded back like most perched passerines). This is not an uncommon sight, especially when they are together as a pair.

2. Why they make a subtle call (unlike their usual loud cackling laughter) – usually the first few seconds when they land on the tree or lamppost opposite my house (above right). I’ve been trying to record this subtle call for ages, but here’s something close I found on xeno-canto.

The next day she succeeded in recording two calls and sent in the video below and a report:

I managed to get a sample of two calls this morning – neither of which is the ‘usual’ repeated double-note noisy cackling. The ‘subtle’ one I mentioned below is heard from the second bird as it flew in and landed, it is also heard in the background at the beginning of the video. I think both of these are comfort calls as the birds are perched on their favourite lamppost.

“The second bird was also adopting the ‘angel’ pose I was referring to below, with wings held folded in an open position.” 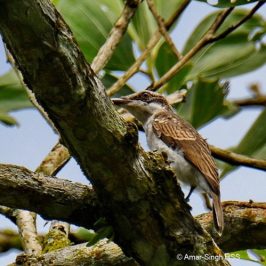 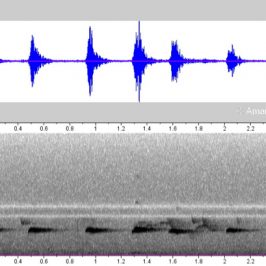 Lena Chow videoed an Oriental Dwarf Kingfisher (Ceyx erithaca) with a skink clamped in its...