Today is World Sparrow Day. Organised by the Nature Forever Society, it celebrates the common sparrows with events throughout the world. Hopefully, these events will bring sparrow lovers and nature supporters together and trigger a conservation movement to save the world’s common flora and fauna.

Once the most common birds in the world, the 26 species of sparrows have shown a definite decline throughout much of their urban and rural habitats alike. The exact reason for this universal decline has so far evaded scientists. However, it is generally believed that habitat destruction, degrading ecosystems, lack of insect food for the young and possibly also the increasing microwave pollution are the causes.

In November 2005, we highlighted the fact that we know little of the Eurasian Tree Sparrow (Passer montanus). Why, you may ask? Well, mainly because local birdwatchers dismiss it as a common “trash bird” – too common to warrant study, if at all birdwatchers actually study birds. Whether disregarded by birdwatchers or not, it is a fact that this sparrow is in similar decline.

In my neighbourhood these sparrows were once very common. The houses were then using old-fashioned V-shaped tiles that leave small openings along the roof edge. The sparrows enter these openings and build their nests under the roof. Nowadays houses make use of modern flat tiles that leave no openings. And as old houses were pulled down to make way for new structures, the sparrows are deprived of their traditional nesting areas.

Thus the once considered a nuisance bird because of its abundance is becoming rare. But not anymore, not in my garden anyway! Ever since I started feeding a pair of Spotted Doves (Streptopelia chinensis) in my garden, I have also attracted a small population of up to a dozen or more Eurasian Tree Sparrows (above). They visit my garden daily, congregating in my Dracaena tree, waiting for me to provide birdseeds to the doves. The two species coexist peacefully although the sparrows tend to rapidly deplete the birdseeds due to their larger number. By late evening they disappear, to roost somewhere else.

Now I have an opportunity to interact with the sparrows and possibly make observations of their behaviour. 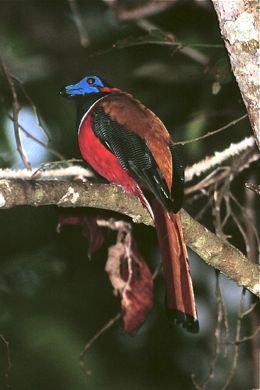 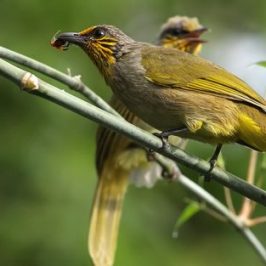 “White-headed Munia (Lonchura maja) are decreasing in number in the Malaysian city of Ipoh in... 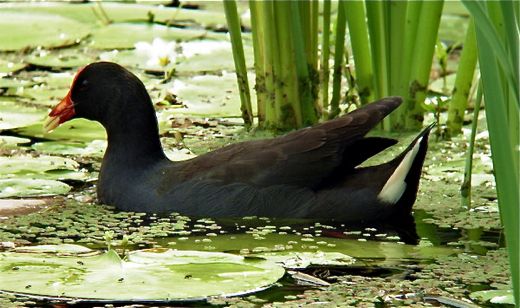 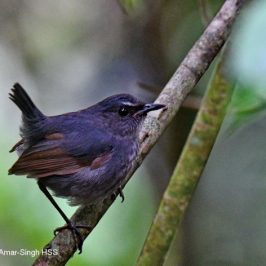 “Shortwings are not easy birds to see, often in dark undergrowth, and this makes appreciation...