“It was observed that Grey Herons (Ardea cinerea) would always feed their young in the confine of their nests – see HERE. This was true even for older chicks that were about to fledge (left). Some older chicks can be adventurous and may wander outside their nest to explore the surroundings. Feeding young in the nest seemed to be a good strategy. Due to aggressive grappling of bills during feeding, precious regurgitated food may be inadvertently dropped. It is easier to retrieve the dropped food in the nest. Food dropped elsewhere may make it irretrievable. Fixing the feeding venue in the nest is a good and easy way to reduce possibility of the regurgitated food from going to waste. The sequence of pictures attached illustrated an adult and one of its chicks returning to their nest for feeding.

“On this occasion, when the adult returned, it did not fly directly to the nest as it normally did. Instead, it landed and perched on a vantage point on an adjacent tree. It had, probably, noticed one of its chicks out of the nest. Chick “A” had wandered out of the nest and was perching at the position that was circled in red dotted lines before the adult’s arrival. The return of its parent got chick “A” excited and it began to scramble back to the nest (below left). Chick “B”, which had remained in the nest, was also excited. (Please note the image of chick “A” with red dotted lines was an earlier image that was cut and pasted to show its relative position before its scramble back to the nest.) “With chick “A” scrambling back to the nest, the adult swooped down to join the chicks in the nest (above right). Chick “A” managed to return to the nest before the adult landed just outside the nest. The feeding ritual began and a fish was soon regurgitated out form the parent’s throat. One of the chicks grabbed hold of the fish while the other can only look at the adult (below). Unfortunately for the second chick, there was no more food. The adult paused for only a short moment before taking off, rather nonchalantly. “It would seem that the adult was giving equal opportunities for both its chicks for the feeding. The adult could have simply fed chick “B”, which was already in the nest; but had chosen to wait for chick “A” to be in the nest before commencing the feeding ritual.

“There was another occasion when an adult was similarly observed to be waiting for all its chicks prior to feeding. At another nest, there were three chicks. One chick, which had already fledged but remained around the nest, had flown away before the arrival of this adult. The adult waited outside the nest, probably to see whether its fledged chick was around for the feeding, before it finally proceeded with feeding for its two remaining chicks in the nest.” 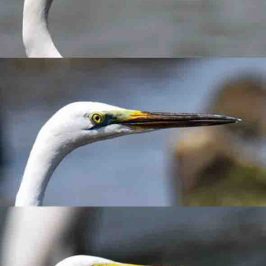 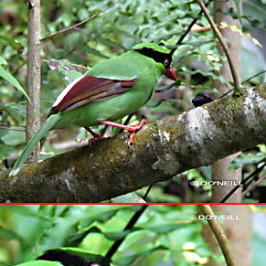