Cheong Weng Chun photographed an adult malkoha with a gliding lizard in its bill during a guiding assignment in Kuala Selangor Nature Park, Malaysia on 14th Jan 2011. The malkoha had its mandibles clamped on the neck of the lizard and was thrashing it in the air. Once the lizard became lifeless, the malkoha flew off to pass the prey to its juvenile. The latter was rather inexperienced in handling the lizard but finally managed to handle it properly. Check out the video above.

According to R Subaraj, “The malkoha is a Chestnut-bellied Malkoha (Phaenicophaeus sumatranus). The draco is probably a Common Gliding Lizard (Draco sumatrana).

It was in October 2014 that I first found out that the Common Palm Civets... 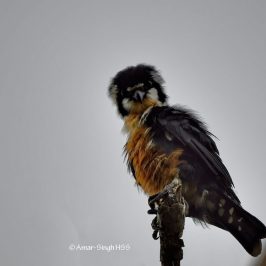