“I was on my usual morning birdwatching yesterday when I saw a small bird flying into a [chempaka merah] (Michelia champaca) [tree], which was http://www.besgroup.org/2010/12/08/asian-glossy-starling-regurgitating-seed-of-michelia-champaka-2/#more featured in a story about Asian Glossy Starling feasting on its seeds. I quickly mounted the camera on tripod, adjusted and aimed towards the bird. Most of the time, the common garden birds found around my condo would have flown away before I had the time to aim the camera at them. In this instance, it stayed there long enough even for me to move the tripod for a better view.

“With the camera in video mode, I could see that it had a prey, though I could not make out what was it. It took some time to manipulate the prey before swallowing it and wiping the bills against the perch.

“On review of the clip later on pc, I realised that I have encountered a ‘new’ bird. A check on the ‘Oriental Bird Club Image Database’ led me to conclude that this is a juvenile Tiger Shrike (Lanius tigrinus), though it could be a juvenile Brown Shrike (L. cristatus) (any comments on this would be appreciated). The prey appeared to be a gecko though the autofocus was slightly off the main subjects.

“Interestingly, I noticed from the video clip that this junior, like some other birds such as Brown Shrike (above), Pink-necked Green Pigeon, Spotted Dove and Zebra Dove, wag their tails or move them up and down (different from spreading the tail feathers as part of comfort behaviour). I Wonder what is the purpose of this behaviour?”

According to Margie Hall, “…some tail movement is almost certainly balance in relation to the birds other body movements. Your Brown Shrike is sitting on a slightly moving wire, so s/he needs to balance continually. Spotted Doves wag their tails just after their rather heavy landings from flight. However, if you can get close enough to Brown Shrikes you will find that they sing very very quietly to themselves, and tail movements are associated with singing in some/many (all?) birds. I couldn’t tell if your Brown Shrike was singing because of the d*** music that you had added to your video!”

Chong Hong clarified: “As for the Brown Shrike video, it was recorded from inside a stationary car about 12 to 15 feet away from the bird, with music coming from the car radio. Even without the music, it is doubtful that the microphone can pick up the soft call, given that the location is rather noisy in terms of traffic noise. I saw some throat movements in the juvenile Tiger Shrike after it had its meal. Perhaps it was, like you said, singing quietly to itself, but I couldn’t hear it from the video (also recorded from a distance of about 12 to 15 feet), though it was in a very much quieter location.

“The Brown Shrike can be found regularly in the same location. So far I have only heard its call, the tat-tat-tat 2 times, once when a Little Egret passed by some distance away. I will try to listen to its soft call if I can get close to it.”

To this, Margie added, “The tat-tat-tat scolding is a territorial communication.
Yes, you have to be very very close to hear its quiet singing, but if and when you do you will be surprised at how melodic it is.” 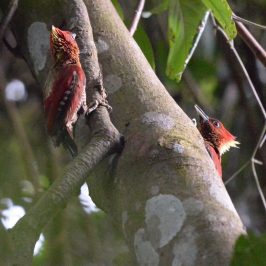 “During a morning walk in the Central Catchment Reserve in Singapore on 4th November 2016... 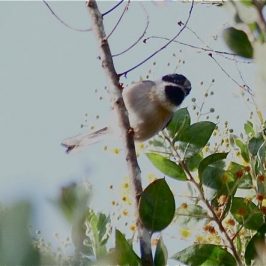