“Long before the arrival of the nesting Grey Herons (Ardea cinerea) in Sungei Tampines heronry, Striated Herons (Butorides striatus) and Black-crowned Night Herons (Nycticorax nycticorax) had already been making use of the place as their home. This has been their roosting and nesting ground for many years. Unlike the exposed nests of the Grey Herons, these smaller herons’ nests were well hidden deep inside the dense mangrove foliage and difficult to view. Nevertheless, breeding of these species could be confirmed as their young had been observed begging to be fed when they wandered into the open. “While observing the nesting of Grey Herons, there were sporadic opportunities to observe the smaller herons, which would come into view on some occasions. During one such encounter, a juvenile Black-crowned Night Heron was observed to be perched on an exposed branch over water. The juvenile looked comical as it looked high and low, as if searching for something (above left). Unexpectedly, it lost its balance. It had probably over-stretched itself while standing upright and looking up. It had to out-stretch its wings to maintain balance (above right). After regaining its composure for a short moment, its antics continued as it stumbled again. It had to perform another balancing act by alternating between raising its left and right wings. “What was the juvenile trying to do? The mystery was unraveled when it moved a few steps up the slightly sloping branch, stopped and extended its neck. With one sudden rapid thrust of its bill, it broke of f a near vertical stem and held it in its beak (above). It then flew off with the stick into the dense mangrove foliage. Obviously, this juvenile heron was on the lookout for suitable nesting material and had found the stick it wanted.

“Correct me if I am wrong. Judging from its juvenal plumage and orange eyes, this juvenile Black-crowned Night Heron was probably about one year old. It was indeed strange that such a young juvenile could be acquiring nesting material. Could this juvenile be learning nest building in preparation for its adulthood? Or could it be practising cooperative breeding where the young assist the adults in nest building?” 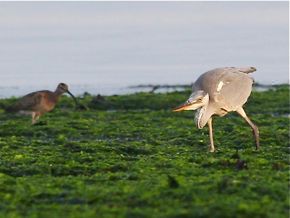 “The ability to learn is not limited to humans. In the wild, animals including birds...