In November 2010 Francis Yap encountered the Yellow-fronted Canary (Serinus mozambicus) twice in Singapore’s Punggol grassland. He was wondering whether the canary was breeding and why some of the birds were of a different colour from the usual yellow. This canary, an escape from the bird cage trade, was first spotted in the same location in May 2009. Haniman Boniran a.k.a. Summerian Turks was consulted and this is his reply: “The pictures shown were two distinct species of the genus Serinus that has been imported into Singapore on a regular basis. The yellow one is Serinus mozambicus [Yellow-fronted Canary] (above left) and the grey-brown one is S. leucopygius [White-rumped Seedeater] (above right). The second picture (with streaks on breast) is a juvenile S. leucopygius (below). “The green singing finch (S.mozambicus) as it is known in aviculture has been introduced to many non-African countries such as Puerto Rico, Reunion Island and USA through the song bird trade. According to UNEP WCMC records, this species is breeding in their adopted lands. Outside the African continent, the grey singing finch (S. leucopygius) is known to breed in USA.

“While the dealers do not discriminate the sexes when exporting the birds out of Africa, males are highly sought after for their singing abilities. And since both sexes were exported and birds have been escaping, breeding could possibly have occurred in Singapore. There has been recent importation of the two species, said to be from Central African Republic and Senegal. The sudden surge of imports can also mean a higher percentage of escapees, including juveniles, making appearances in preferred habitats. So it cannot be assumed that breeding has taken place unless evidence of nesting and successful rearing of chicks are recorded. These are scrubland birds and the Punggol ‘grassland’ seemed like an ideal habitat. Birders could pay extra attention to this habitat and species so breeding can be confirmed.

“Other than the two species, many species of finch have been imported into Singapore. Most of these were captive bred birds and their numbers are lower; less than 20 individuals per consignment. They include common bull finch, linnet, goldfinch, siskin, canary and their many hybrids known as mules. Aviary bred strain tend to be a lot hardier than wild caught specimens. So these birds do well even in tropical climate like Singapore. They usually originate from Europe.”

On 3rd December 2010 Francis had this to add: “There are at least six birds. Two definite S.mozambicus, three S. leucopygius and one other I am not too sure. Even as I write this, there are other photographers in the area looking for them. Two days ago, I managed to see this flock again with another photographer…” 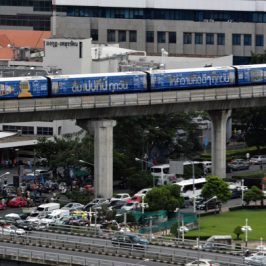 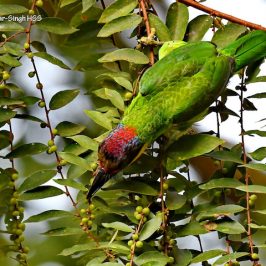 A recent post on birds feeding on fruits of Bridelia tomentosa and their images can...