“I was on Pangkor Island [Malaysia] last week and saw these odd hollows on the sand just behind the beach and right by the bar at which I was enjoying an early evening beer (above).

“I was wondering what had caused the hollows, but later saw that a flock of Eurasian Tree Sparrows (Passer montanus) had selected this spot as their sand-bathing area and had created the hollows over time by their rapid movements in the dry, coarsely-grained sand. As the photos below show, they use the hollows again and again, rather than starting from scratch each time. It would appear that by being below ground level, they more easily get the sand to fly over them when they roll around and flutter their wings and tails. “The number and proximity of the hollows (there were no other such spots that I could see in the vicinity) would also suggest that sand-bathing is a social phenomenon in this case, and not perhaps solely to treat parasites and dry skin.” 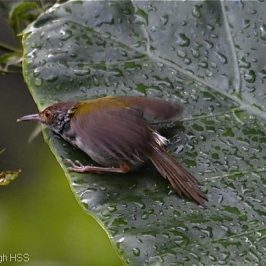 “The Common Tailorbird (Orthotomus sutorius maculicollis) love to bathe. On a hot day, after we...

Tony Tham’s video clip was documented at Singapore’s Venus Loop. It shows a pair of...

“It was late in the evening, at around 5.00pm when the birds would come one...