“The Black Baza (Aviceda leuphotes) is a small bird of prey. This species can be easily recognised by its uniquely coloured plumage and its prominent crest of erected feathers. Although its upperpart plumage may look black, traces of chestnut colour and irregular spots of white could be found on its wings. It has a band of white across its breast with chestnut-coloured bars below. During peak migration periods, large spectacular flocks that may number hundreds can be sighted in Thailand and Peninsular Malaysia. Only a small fraction of these arrive to winter in Singapore. It is a common passage migrant and winter visitor in Singapore. “Although common during their winter stay, Black Bazas are rather shy and will normally fly off when they sensed that they are being watched. It was a pleasure to observe a Black Baza indulging in comfort behaviour in a barren tree that was more than 30 metres away and surrounded by dense thickets (above and below left). It remained there for more than 30 minutes, preening and stretching its wings occasionally. “Interestingly, some of our resident birds, namely the Black-Naped Orioles (Oriolus chinensis) and Pink-Necked Green Pigeons (Treron vernans), were seen arriving to perch and bask in the morning sun (above right). They showed no fear of the visitor as they perched on the same tree, but were at a respectable distance. From Wikipedia, Black Bazas: ‘have been observed to attempt capturing small birds such as wagtails by making dashes into flocks.’ Whether orioles or pigeons are part of its diet is unknown. These birds were completely ignored as the Black Baza continued its preening session. The resident birds were also indulging in comfort behaviour, but did not remain for long. The Black Baza departed by flying off into the wooded area.

“An interesting note of this individual was the unusual, huge white spots that surround each of its eyes. They appeared to look like oversized eye-rings. A check on images from the internet including Oriental Bird Club did not reveal any Black Bazas that have such a feature. Is this feature really unusual or is it something that has been missed and not well documented?” 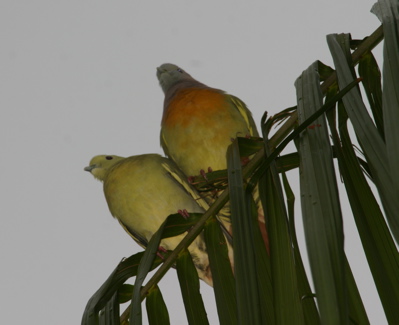 Jason Cho was at Singapore’s Mandai Orchid Garden on the morning of 1st May 2009...