“I heard a loud ‘argument’ going on in a dense bush and decided to watch quietly. It was a verbal battle between a pair of Fluffy-backed Tit Babblers (Macronous ptilosus ptilosus) and a pair of Stripe-throated Bulbuls (Pycnonotus finlaysoni finlaysoni). I suspect the argument was over foraging; access to feeding site. Possibly due to my presence, the Fluffy-backed Tit Babblers ‘won’ the ‘argument’.

“My pictures of the Fluffy-backed Tit Babblers are poor but I had no heart to flash these lovely ‘near-threatened babblers (left) (see the lovely pictures in OBI databases, especially by Choy WM.

“I however took lots of recording of the verbal battle and would like to share a fragment.

“Records from Peninsula Malaysia on calls apart from the classical ‘pong’: wuh wu-hu, hherrh berr, iwit-cherrh, etc. (Robson 2000); and ‘… another … ends with a churring note’ (Chasen 1939).

“The recording posted HERE (apologise for slightly bigger file, have slashed extensively) is of the argument and if you concentrate on the Fluffy-backed Tit Babblers (ignore the Stripe-throated Bulbuls and background river) you may appreciate the ‘churring call’. I believe, having watched this behaviour for some time, that this is a call used to show displeasure (scolding call), may be used for territorial (food source) purposes. In recording HERE I have applied noise removal software but the quality of the call is impaired.

“You will hear a similar call recorded of the bird from Thailand here HERE (go to Fluffy-backed Tit-Babbler – chatter), (again there seems to be another bird in the background, although I considered whether the musical notes could be made by the Fluffy-backed Tit Babbler itself?).” 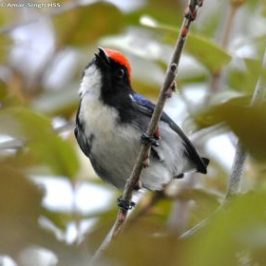 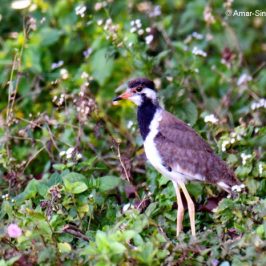