Willis’ earlier post was on the courtship behaviour of the Secretarybird (Sagittarius serpentarius), captured in the African plains of Kenya in October 2010. Here, he shares with us his images of the same species catching a flying insect.

The bulk of the Secretarybird’s diet consists of arthropods, particularly insects like grasshoppers or locusts. When the opportunity arises, it also catches animals like snakes, frogs, lizards, rodents and small mammals that include hares, mongooses and meerkats.

The images above show it going after an insect, most probably a grasshopper it may have flushed as it trampled through the grass. It would be a simple matter if the bird can catch the insect with its gaping mouth but obviously this is not the case (above left). The use of its powerful foot to deliver a blow to the fleeing insect is obviously another method of dispatching preys (above right). 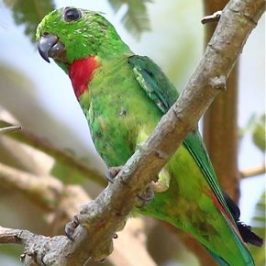 “What do parrots eat? According to Wikipedia, the most important components of most parrots’ diets...