Lin Yangchen was at the Singapore Botanic Gardens car park in late November 2010 when a loud buzzing and sounds of a struggle attracted his attention. What he saw excited him. It may well be the first record of a Javan Myna (Acridotheres javanicus) catching a dragonfly.

He missed the initial capture. The dragonfly must be flying low when the myna spotted it and managed to pick it from the air. Once firmly clamped between its mandibles, the myna started bashing the dragonfly against the ground and the nearby wall. The prey put up a struggle as evidenced from the high pitch buzzing. But eventually the dragonfly was knocked cold and the myna flew off with its prize.

The action was fast and furious and Yangchen was too slow to get any clear close up shots of what happened. The image above is his only record of his encounter, with the myna happily walking away with the dragonfly in its bill…

So far, we have only documented bee-eaters catching dragonflies: HERE, HERE and HERE. 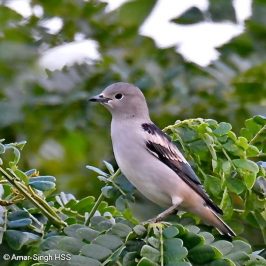 “Saw a flock of 35-40 of these migratory Purple-backed Starling (Sturnus sturninus) with a few...

One of bee-eaters’ favourite food, or at least what we perceive as its favourite, is... 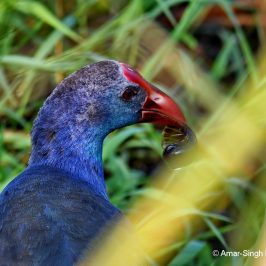