Willis’ photographed two different Southern Ground-hornbills (Bucorvus leadbeateri) on different days when he was on an African safari in Kenya’s Masai Mara recently. Both birds are males, recognised from their bright red bare facial skin and inflatable throat. The female is distinguished by the blue patch on the red throat skin.

This is the largest and heaviest of the hornbill species, found in the woodlands, savanna and frequently, the adjoining grasslands of South Kenya and nearby southern African countries. Although large in size, it can still fly, although rather infrequently. The inflatable throat pouch is thought to function in sound production – deep booming cries usually heard before first light and periodically throughout the day. These have been sometimes mistaken for the low groaning of lions.

The Southern Ground-hornbill feed on arthropods like insects, scorpions, snails, frogs, lizards, snakes and small mammals. Here, you see the hornbills, each with a snake clamped in his bill. The hornbill forages as it walks, striking the snake with lightning speed once it is spotted. The massive bill of the hornbill ensures that it is safe from the snake’s defensive strike, however venomous the latter is. 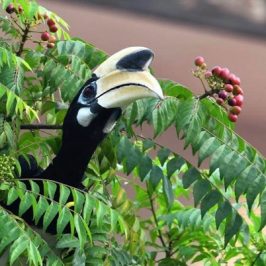