“On a recent trip to Lake Kenyir, Malaysia, I was lucky enough to witness a Peaceful Dove ( Geopelia striata) (presumably a male) seemingly to ‘kowtow’ and approach a presumably female bird. “There were several Peaceful Doves flying about in the vicinity of a bare tree. As I quietly approached them, I noticed that there was one peacefully sitting at the tip of a branch – it’s the bird on the right of the attached pics. Another bird flew in, cooed most melodiously and slowly approached the first bird (above left). After every 2 or 3 steps closer to the first bird it would go into a very low bow, lifting its tail high up (above right). It did this 3 or 4 times as it edged its way closer and closer to the first bird. All the time it was cooing loudly and melodiously. I held my breath as I waited for the first bird to react and hopefully signal a ‘come hither’. Unfortunately, at the last moment, something stirred or maybe they felt my inquisitive eyes on them invading their privacy. In any case both birds were spooked and they flew off.

“…I was lucky enough to have captured twice the low almost humble approach and the cool aloofness with which ‘milady’ seemed to have regarded the approach.

“Am I right in my interpretation of what happened? Was the male ever so humbly asking for permission to mate with the female?”

Note: According to Gibbs et al. (2001), “In courtship the male follows the female on the ground, intermittently raising and lowering his head and upper body, then bowing low while raising his tail and giving a coo call.” 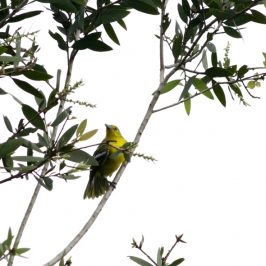