“The behaviour of Quail is hard to observe as they are very shy. I have had a number of observations where the birds have not been aware of us or choose to ignore us.

“I have seen one Barred Buttonquail (Turnix suscitator atrogularis) at our home but more often in the Chinese cemetery next door or nearby land awaiting housing development. They are usually seen in pairs. I have seen one altercation (fight to the death would be more like it) in the cemetery 4-5 years ago where a male-female pair ganged up to ‘beat up’ another male. The scene is still vivid in my memory because one bird had got the other’s neck in its beak and was wringing it side to side. They took off a few minutes later, still fighting, after spotting me (no picture documentation).

“One posting in the Oriental Bird Images by Adhy Maruly from Indonesia is reminiscent of mine. “This is my second observation of an Barred Buttonquail altercation. These were taken very near my area – was wandering around checking up on resident birds. Drove into this narrow tarred road with secondary growth on both sides. Saw a male-female pair ‘foraging’ on the road at some distance (20-30 meters).

“Decided to pull over and just watch as they did not disappear immediately. I then observed 5-6 minutes of what I assume to be territorial fights. The male-female pair would both actively chase off either a male or female (assumed another pair) when they came onto the road. They even seemed to be doing sentry duty on the road, although what they are trying to protect on the road is beyond me (they did seem to be foraging when I arrived).

“The composite shows one of the altercation episodes (taken from some distance) (above). Here the ‘resident’ male is seen actively chasing another male off the ‘premises’.

“The single picture shows the pair doing sentry duty on the road (above).” 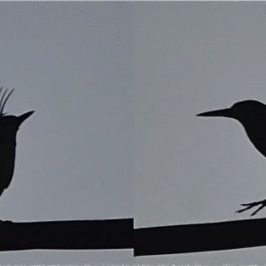 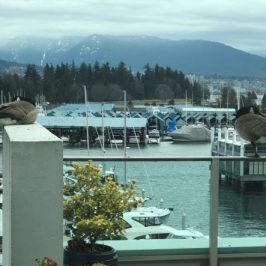 “My friend, Mrs Cheng, who lives in Vancouver has had a regular pair of Canada...