“Standing at about a metre tall and with a wing span of about 2 metres, the Grey Heron (Ardea cinerea) is one of the largest birds that can be found in Singapore.

“The Grey Heron’s flight is an elegant sight. The typical flight of the Grey Heron is usually quiet. Although it may call briefly during take off or landing, it will normally fly with its mandibles closed. It was a strange sight to see a Grey Heron flying by with its mandibles opened (above). It was even weirder to notice its tongue sticking out between the opened mandibles during flight. The bird was definitely not calling and the opened mandibles and stuck-out tongue remained that way during the brief period that it was in view, probably for around 4 to 5 seconds.

“The Grey Heron’s tongue is rarely displayed. It was the only time that I have witnessed a flying bird with its bills opened and with its tongue in display.” 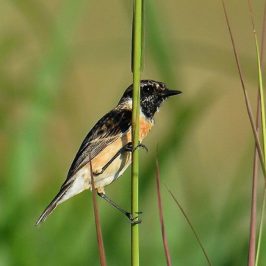 “The Eastern Stonechat (Saxicola maurus) is a common migrant in the north but in Peninsula...