For the month of August 2010, the suspected female Spotted Dove (Streptopelia chinensis) visited my garden without her partner. Twice a day she came, alone. Then suddenly in early September, she arrived with her partner (above). Is he the same partner or has she paired with a new male?

I tried to compare this new partner with her previous partner but am not able to convince myself that they are the same. It is possible that the earlier bird was predated or trapped and the female has now paired up with a new male. But then the new partner is ”tame” but not as tame as the female. If he is actually a new bird, then would he not be shy of me? And on the 9th September, the pair appeared to be checking a potential nest site (above). Both flew to my Macarange heynei tree, with one settling in a spot and the other going round as if looking for nesting material.

On the next day, one of the doves was perching on a branch of a tree cooing loudly. Its mate returned the call with a softer cooing, then flew to the tree to land on a different branch. The latter slowly moved to join its mate on the same branch before flying down to feed on birdseeds. Satisfied, they returned to the branch where they indulged in allopreening and a few bouts of courtship feeding. Later they flew to the nearby Macaranga tree to check on the nest site again.

It was observed that both doves vocalised with their bills closed. 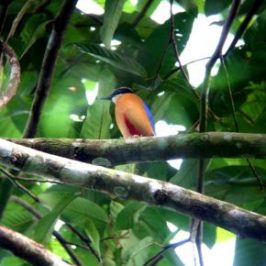