“Posting some nesting Glossy Swiftlets (Collocalia esculenta cyanoptila) but want to start with a disclosure.

“I dislike using flash in bird photography but in this instance after trying a variety of camera modes, used flash to document the nesting. I kept my distance with the zoom and did not flash any bird/nest more than two times to limit trauma.

“Most nesting adults did not move despite the flash, but two were frightened and did fly off momentarily (returned shortly). I also took care that no one saw me taking pictures, so as not to bring attention to these birds.

“These were taken at 9am and what is unusual about them is that these Glossy Swiftlets are nesting in the heart of the city in an underground car park of a high rise building (left: top adult, bottom juvenile).

“Wells 1999 states (under Habitats & Ecology) that ‘Breeds wherever suitable sites occur … from the edge of suburbia … but unlike some Aerodramus swiflets species, not actually in towns’.

“Another unusual feature is that this underground car park is fully lighted with florescent lighting day and night. In addition there is piped music played here most of the day and much of the night (been there for late night dinner). I am uncertain how the birds cope with the noise and light.

“There were eight active nests at this level. In addition there were four damaged nests – these appeared to have been destroyed by the management. When I walked up to inspect higher levels I found evidence of more damaged nests. I suspect the management is struggling with bird droppings and I hope these birds can make it.

“In two nests there were juveniles. I suspect most other birds are incubating eggs as they did not leave the nest or bring food to it, but were patiently roosting throughout my time there.” 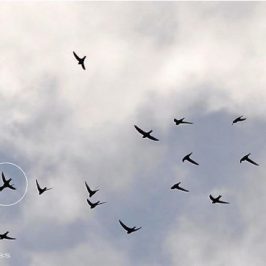 “I have always seen House Swift (Apus affinis subfurcatus) rushing through the air in the...