KC Tsang’s video study shows the Olive-backed Sunbird (Cinnyris jugularis) harvesting nectar from this the coral plant, also known as firecracker plant (Russelia equisetiformis). This shrubby plant has drooping branches and tiny bract-like leaves, looking much like those of the casuarina (Casuarina equisetifolia), thus the specific name of equisetiformis. A native of Mexico, the plant is commonly grown in gardens for its small, attractive red flowers that appear throughout the year. Note that there are also light yellow flowers among the red. This is a cultivar named ‘Salmon’. Fruits are seldom formed under cultivation.

The fused petals that form a short is well adapted for our local sunbirds to probe for its nectar. “From my observations, it looks like the flowers do not produce copious amount of nectar making it necessary for the bird to flit from flower to flower quickly,” observed KC. “The other thing to notice is that the stem of the plant, although thin and soft, is strong enough to support the weight of the sunbird.” 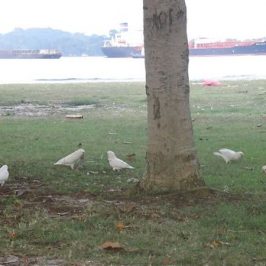