“It was about half a year ago, in late February 2010, that a few Whimbrels (Numenius phaeopus) were seen feasting along a coastal mudflat. They were having a feast of fiddler crabs, ‘fueling’ and storing precious energy before their long migration back to the northern hemisphere where they will spend the summer.

“The Whimbrel is a large wader with a prominent bill that is long and curved. The bill is a useful tool that the bird uses to probe into the soft mudflat in search of small invertebrates. However, the Whimbrels that I saw in February were not that successful when probing into the mudflat. In fact, they need not probe into the ground. As it was low tide, there were plenty of fiddler crabs that were foraging in the exposed mudflat. Spoilt for choice, the Whimbrels just need to pick up these tiny crabs that were wandering on the surface of the mudflat. “Previously, I had seen a Whimbrel from quite a distance away. From afar, it held what looked like a flower in its beak (above left). I realised that it was a fiddler crab with its red pincers and legs that resembled the petals of a flower from far. The bird was seen repeatedly dropping the crab that it had caught (above right). Perhaps it was clumsy and had trouble handling the prey in its long curved beak. What I presumed then was to be proven wrong. The repeated dropping of prey was, in fact, a deliberate feeding behaviour. Its purpose was to stun and weaken the prey.

“That Sunday morning, I was much closer to the action and managed to have a clearer view of the feeding behaviour. The Whimbrel was patient; taking its time to look before picking up a choice fiddler crab with its chopsticks-like beak. After catching its prey, the Whimbrel will either drop it to the mudflat or fling it some distance away. The crab will try to scramble away when it landed, but will invariably fail. Apparently, the fiddler crab was stunned and weakened by the throw; and was thus unable to escape. Hence, the Whimbrel was definitely not clumsy. “Remarkably, on some occasions, perhaps in a desperate attempt to ward off its relatively huge predator, the male fiddler crab could be seen waving and displaying its single large pincer in the air. This brings me to the next interesting observation: the Whimbrels were not keen to consume the huge pincer. In one instance, a Whimbrel could be seen doing a quick twisting motion of its head while holding onto the arm of the pincer. This forceful action detached the huge pincer from the crab’s body (above left). The Whimbrel followed up by picking up and swallowing the crab’s body and legs (above right). The huge pincer that was left on the ground was simply ignored as the bird looked for its next prey. On another occasion, the huge pincer was severed from the force of being flung. Similarly, the Whimbrel consumed only the body and legs without going for the severed pincer.

“After half a year of waiting, the new migratory season is approaching. The Whimbrels and other migratory birds will again arrive in this part of the world. The fiddler crabs in the mudflat must have multiplied in their absence.” 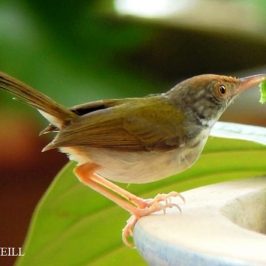