“It had been a long tiring walk up hill and I was on my way down. I had one scare with some humans who were not pleasant and I thought I might get robbed (one of the perils of bird watching alone in the jungle). Suddenly the air was filled with the strident warning calls of the Dark-necked Tailorbirds (Orthotomus atrogularis atrogularis). “As I have alluded to before, this is the friendliest tailorbird I know. After a brief period of adjustment to each other on the trail, the two adults (above: male left in full breeding plumage, female right) accepted my presence and continued foraging and feeding their two juveniles (below: notice the chestnut is just beginning to appear in this juvenile, but not the other). The parents split up (usual behaviour) and each took care of the feeding of one juvenile. They were about 3-7 meters apart most of the time and kept in constant contact with calls.

“None of the pictures I post here can describe their beauty and the experience that I have had many times with Dark-necked Tailorbirds. They often allow ‘naked-eye’ viewing at 1-2 meters and cameras/lenses just do not work!

“The male was the braver of the two and the juvenile with him, possibly because the parent was not afraid, allowed me close observation. The male would occasionally pop his head out to check on me and occasio.ally even seemed to show me a prize he had captured for the juvenile – usually a catterpillar.

“We spent a pleasant half hour together but unfortunately I had to move on downhill. This family really made my day and renewed hope in me.”

Two calls are posted: One is the juvenile soft mewing for food (I have amplified this call) HERE. The second call is by the adult male, of two different calls and a response by adult female HERE, they used these to keep in touch as they foraged and fed a juvenile each. 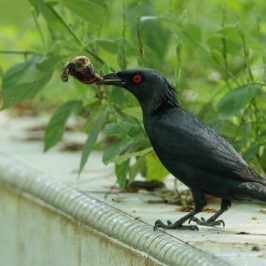 Caterpillars are a favourite food with birds LINK 1, LINK 2. However, those of the... 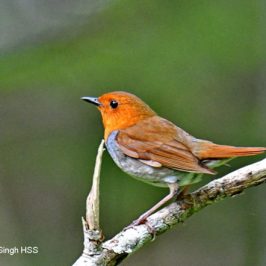 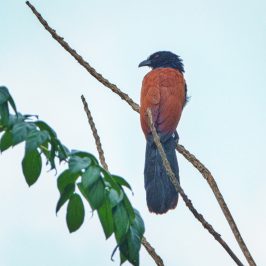