“I have witnessed Javan Mynas (Acridotheres javanicus) fighting on a few occasions but have not managed to put them on record due to various reasons. Either the fight ended when the mynas were disturbed or I was simply without a camera. Then, on 24th July 2010, I finally managed to capture a few images and a short video of the action. “I was passing by a town park when a noisy ruckus of scolding calls, recognised as from mynas, was heard. True enough, two pairs of Javan Mynas were having a fight on a grass patch some distance away (above and below). Quickly, I whipped out my camera and approached nearer. The mynas were engrossed in their dispute and ignored me as they continued while I started shooting. To better capture the ruckus and flowing action, I decided to switch to video mode. While recording in video mode, the fight ended abruptly when all four mynas suddenly froze and flew away within a second. “Previous fights that I saw included a one-on-one fight where I was surprised to see a pair of mynas lying, almost motionless, on their sides in a school field. Approaching closer, I saw that they were entangled; with claws clutching to each other in a sort of a lock. Amazingly, no vocalisation was heard on that occasion. It was only later that I realised that they were having a fight when they remained locked together for a long time and were tugging and flapping their wings occasionally.

“Another fight that I witnessed involved probably ten birds with lots of chasing and pecking. They were making a ruckus with plenty of angry scolding calls. As this happened in a busy bus interchange, a few curious commuters gathered to investigate the noise. The mynas were oblivious to the crowd and continued with their fight. Their furious fight started from ground level and continued as they flew onto the roof of the bus interchange.

“Having witnessed a few fights involving Javan Mynas, I believe that such fights are common. Is fighting amongst birds common?” 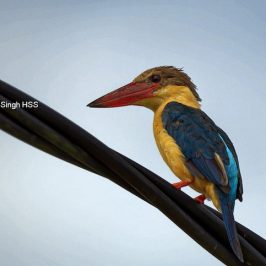 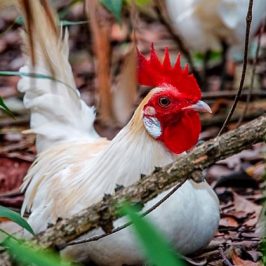 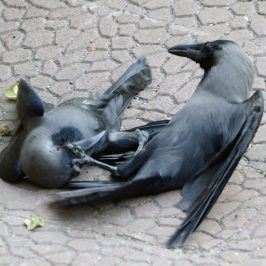