Lena Chow sent in an image of a Streaked Spiderhunter (Arachnothera magna) stealing nectar from the large flower of the angel’s trumpet (Brugmansia x candida). The image was taken at Fraser’s Hill, Malaysia where she was holidaying in August 2010.

The plant is a hybrid between two tropical Andean species, B. aurea and B. versicola. It is a popular ornamental and widely cultivated for its large, hanging, trumpet-shaped flowers. The plant’s natural pollinator is a species of night moth with a very long proboscis. The Streaked Spiderhunter here is probing the base of the flower to get at the nectar – just like the sunbird stealing nectar from the hibiscus flower or the bulbul stealing nectar from that of the African tulip.

Brugmansia as well as Datura are notoriously known for their poisonous and hallucinogenic properties. The main ingredients are hyoscyamine and scopolamine, found in all parts of the plant. These plants have a long history of medicinal and ritual use.

In the ancient Hindu custom of suttee, a recently widowed woman was supposed to walk into her husband’s burning funeral pyre. Apparently the widow was fed with datura seeds that disorientated her, thus allowing others to direct her into the funeral pyre. 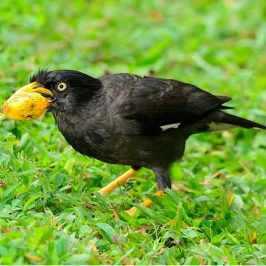