“Drongos are great mimics and I have spent many pleasant hours trying to find a bird with a melodious call only to discover it was a Drongo,” wrote Amar. “…Note that there was a rushing river nearby adding to the background noise. Part of this call has a metallic component that was made by the bird.”

Earlier, on10th January 2010, he heard a loud commotions of squeaks and melodious songs at the same forest. Suddenly two adult Greater Racket-tailed Drongos came rushing past, one chasing the other. “It was a mad chase through thick jungle and dense bamboo. They went round and round for 3-4 minutes, twisting and turning here and there,” recounted Amar (left bottom). “I considered a mating ritual but it is unlikely. The Greater Racket-tailed Drongo, when breeding, are known to be highly aggressive (Wells 2007). This was possibly a breeding male chasing off a competitor. When it was over one of them, out of my view, continued to mimic various calls for some time.” 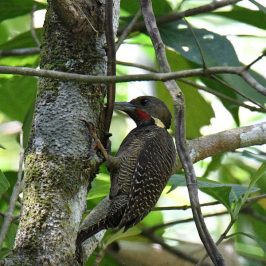