A nest of the Yellow-vented Bulbul (Pycnonotus goiavier) in Jeremy Lee’s condominium was somehow moved by the gardener and placed on a lone slender palm. During a recent check, the chick was found on a frond just below the nest with the parents still in attendance. “However, just about half an hour later when I passed by again, I noticed to my horror that the bird appeared to hanging by its tongue,” recounted Jeremy. “From the picture (left) you can see that the nest is already toppled and you can see through the bottom of it. That was why I took its elder sibling and hand raised it for fear that it would all go down to the ground during the afternoon storms.

“No imagination can solve how this bird got its tongue caught in the material. I got a pair of scissors and cut the line as close to the tongue as possible. The bird looked in a bad condition but it still sat firm on the twig although its neck was now really tired and drooping down and its eyes began to close.

“It comes to a point where you have to decide how far do you want to interfere with fate. I decided to leave the bird as it was and let the parents handle it. I suspected that the bird is rather developed and further handling by a stranger will put it through more stress.

“By evening when I brought our tame chick along it was also calling and begging for food when it heard its sibling call. Hopefully tomorrow I find it in better form. Otherwise I will take it in and force-feed it if I have to.

“Back to the material that snagged it. It was definitely synthetic. Very fine and light and difficult to cut. I strongly suspect that it is the modern nylon kite flying line that is used for modern day kite fighting. That explains its abrasive nature and how it snagged the bird’s tongue and also how it resisted being cut by a pair of scissors.

“The bird’s nest was mainly constructed of fibre from neighbouring palms. Only a small amount of this white string was found on the nest.

“Talk about making our homes child-safe… even birds have the same problem.”

The next morning Jeremy checked on the nest. The adults were around, flying from tree to tree. The chick was on the ground, alive. It flew about 10 metres before Jeremy caught it.

As Jeremy wrote, “A close inspection showed that there was still a considerable amount of string in the mouth, so I left the bird on a perch and went back to get a sharp scissors. When I got back, I took a closer look and found that another 2-3 inches of string was attached to the tongue and at the free end of it, there appeared to be some kind of partially digested but dried up food. I proceeded to cut away the free string and took a closer look at the tongue. It was still a little swollen but in much better shape than the day before. This bird might not grow up to be the best singer in the condo, but it sure is better than dying from being hung by your tongue.

“Putting the pieces of evidence together, it seems like this free strand of string was hanging too close to the perched chick when the accident happened. It looks like a case of an insect or caterpillar that the parent brought back which was not going to go down the throat without a last fight and it probably caught hold of the loose string. So string and caterpillar went down the bird’s throat. The instinctive chocking response of these chicks probably caused the chick to further wrap more loose string round its arrow tipped tongue and the more it struggled the tighter the string got. Until I found it as it was yesterday. Cutting away the taught string solved half the problem. The chick managed to cough up the other 3 inches that was in the stomach. So at this point in time, it only had some string that was wrapped around its tongue behind the arrow tip. I think it can probably do fine without further intrusive surgery. And judging from its strength this morning, even with the remaining 3 inches still on it, it was able to eat despite the inconvenience.

“Will be walking by the last known area where the bird was found everyday to listen out for the parents calls and the chick’s call to ascertain that it is still doing well.

“A closer look at the string, it might be loose thin nylon string from the neighboring construction site. Very thin, but very strong. I found the same material in 3 nests along the same perimeter of the condo fence. Some of the newer nests in other parts of the condo also had the same material. In the past, it was just palm fibre and nothing else.” 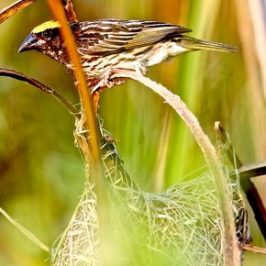 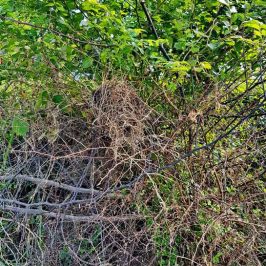 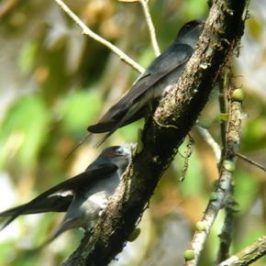 “Saw a number of Pacific Swallows (Hirundo tahitica javanica) building their nests on a vertical...