The Spotted Doves (Streptopelia chinensis) regularly came to my garden to feed as a pair. Their arrival would sometimes come after cooing. And in between feeding bouts one or the other would indulge in comfort behaviour. Only on 10th July 2010 did I notice affection between the pair. There was cooing before the pair flew down to the ground, with one bird continuing cooing with head bobbing. After some minutes picking up birdseeds, the pair suddenly faced each other and made bill contact. The act happened suddenly and lasted less than a second. The bill tips touched, pulled back and touched again. They then resumed feeding. A more prolonged act of affection happened later when the pair also indulged in allopreening. The presumed female preened the presumed male, both with eyes closed.

Sometimes the pair flew to the nearby tree and perched on separate branches after feeding, to subsequently come together on the same branch. There, they would touch bills, preen and preen each other. On the afternoon of 22nd July, there was cooing with the pair perching on my neighbour’s house. The moment I entered the garden, both flew down and started touching bills. There were mutual rapid probing of bills, each session lasting a few seconds when the bill of one dove probed into the open bill of the other (above). Note that in the image below, the eyes are closed. Only after the ritual ended did the doves start feeding. Can the above be courtship feeding? 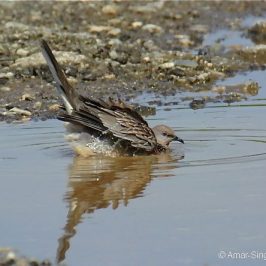