“The BESGroup posting on 15 July 2010 mentioned that documentation of anting has so far evaded photographers. For documentary proof and record, attach are record shots of a Javan Myna (Acridotheres javanicus) in anting behaviour. The shots were taken on 3rd April 2010.

“That morning, a Javan Myna was first noticed standing on a pile of dried leaves on the ground. It was not foraging, but was just standing there doing nothing. What made me take a second look was its somewhat strange expression. Upon closer examination, I realised that it was in the act of anting.

“In between periods of inactivity, it would look into the pile of dead leaves and tuck its beak into the leaves. An ant would appear to be picked up and would be deliberately placed in the underside of its wing (above). Apparently, there were ants in the pile of dead leaves. To be more specific, they were weaver ants that can inflict painful bites. “It was later observed that some ants were already on the bird’s feathers, which only became obvious when they were exposed during preening of the bird’s feathers – mostly under its belly, to the underside and topside of its wings (above). Also observed were some body twisting and shaking by the myna. Could this be an effort to counter the discomfort of ants on its body? The bird could be itchy as it was seen scratching its head with its foot.

“The anting behaviour ended when the myna flew off together with a few other mynas that were also indulging in the same behaviour. These birds were spread out on the ground under the shade in a cluster of trees. For some unknown reason, an army of weaver ants had gathered on the sun-exposed surface of the tree trunk of one of the trees. One myna had directly picked up ants from this tree trunk (left).” 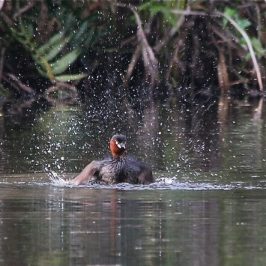 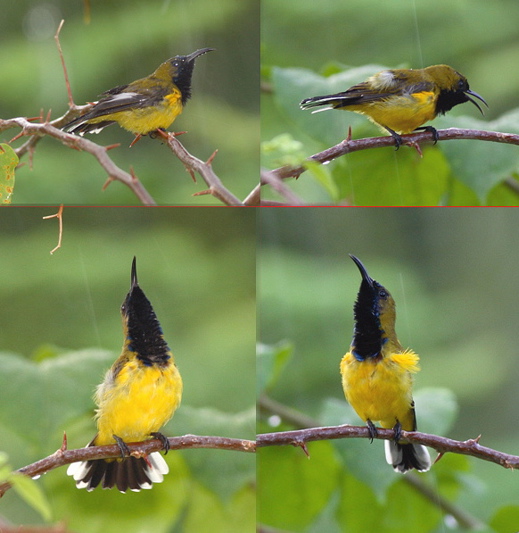 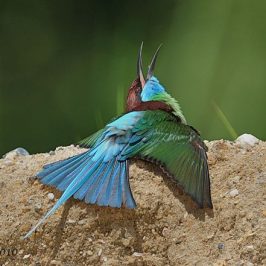 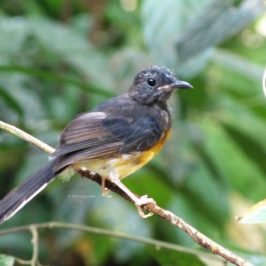