“On arrival to Chaaya Village, Habarana, Sri Lanka, 4th July 2010, evening, we were so fortunate to be able to witness the Changeable Hawk-eagle (Spizaetus cirrhatus) feasting on his recent kill of the Black-naped Hare (Lepus nigricollis).

“The unfortunate hare was ripped open from his most vulnerable part, which is his stomach. The fearsome tool that the eagle had was his very strong curved and sharp beak, that constantly tore at that section of the body, tearing off portions of the skin together with the hare’s fur. Than it proceeded with tearing off pieces of fresh meat slowly filling up his crop. The whole episode lasted more than three quarters of an hour, and in the meantime the smell of fresh meat also attracted a lot of flies, which constantly accompanied us in greater or smaller numbers.

“On almost finishing three quarters of the hare, the hawk-eagle decided that it could than fly away with the remains of the hare to a more private place away from the prying eyes of us humans, and their cameras and flashes.

“This video clip was done with the Sony Handycam HDR CX 550, with a ProOptik 2x Tele-conversion lens.” 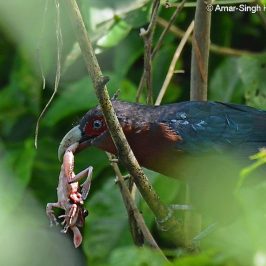