They nest on trees and palms, even in hollows of dead palms. Nests are cup-shaped structures constructed from twigs, dried leaves, roots and lined with floss and grass. Two eggs are normally laid, with both chicks or only one fledging. Breeding details are scarce as birdwatchers are only interested in recording the sighting rather than making detailed observations. Photographers, interested in documenting the nesting, seldom take the trouble to recording the details. However, we have an earlier post on breeding details.

Myron Tay’s image of the Olive-winged Bulbul was photographed in Mandai, Singapore around June 2010. It shows an adult with two young chicks in the nest. Note the prominent pale flanges lining the mouth. Obviously the chicks have just been fed as otherewise they would be gaping widely. These chicks are a few days old, considering that the feathers are still unsheathed, being still in the “pin” stage.

When the picture was taken, feeding was in full-swing, with both parents busy bringing food back to the two chicks. 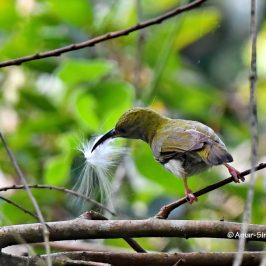