Sun Chong Hong came across a crow’s nest in Bishan, Singapore on 8th February 2010. The nest had a bluish clothes hanger incorporated in it together with some steel wires pinched from a nearby construction site (above left). Later the hanger was somehow dislodged and found lying on the ground under the nest (above centre). On 24th June the old hanger had apparently been recycled in a new nest built in a nearby tree (above right).

An earlier post reports Jungle Crows (Corvus macrorhynchos) in Japan using clothes hangers, not just one but many, to build their nests. 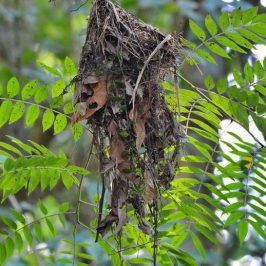