On 14th May 2010 at 1,600 metre altitude in Gunong Brinchang in the Cameron Highlands of Malaysia, Dato’ Dr Amar-Singh HSS photographed the Everett’s White-eye (Zosterops everetti tahanensis) feeding on the nectar of Eucalyptus sp. flowers.

“Some of the best observations are by chance and using the camera as a tool. Saw some movement in a distant eucalyptus tree at the back of the Boh Tea estate tea shop (some secondary jungle at the edge of the tea plantation). Took some pictures and was surprised to find Everett’s White-eyes feeding on nectar,” wrote Amar.

“Their diet is not well known except for insects (Wells 2007). I have seen them foraging as part of bird waves, presumably for insects. I have also seen them feeding on the small ripe berries of the Blue Mahang or Macaranga heynei (formerly known as M. javanica). As well as take invertebrate prey (small larvae or caterpillars).

“This is the first time I have been able to document them feeding on nectar.” 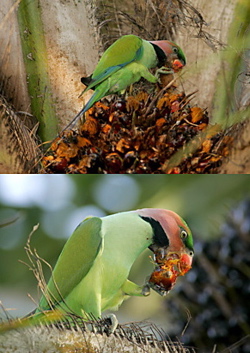 It was raining almost every evening, depriving Eileen and myself our usual walk in the...