The Drongo Cuckoo (Surniculus lugubris) is a nest parasite, with the female laying her eggs in the nest of the Pin-striped Tit-babbler (Macronus gularis). The former is about twice the size of the latter. Within a few days of hatching, the cuckoo chick would have outgrown the host.

The image below, captured by Chris Lee a.k.a. chrisle023, shows the much larger fledgling of the Drongo Cuckoo being fed by its very much smaller foster parent, the Pin-striped Tit-babbler. It is a sight to behold, seeing the smaller adult feeding the larger fledgling, whose reddish gape is large enough to contain the head of the foster parent. Considering the large size of the chick, the foster parents will have to work flat out to keep the hungry juvenile satisfied. Many species of cuckoo practice nest parasitism. Once a cuckoo lays her egg in the nest of a host, the entire burden of hatching, feeding and caring of the young falls on the foster parents. Not only that, the cuckoo chick on hatching will throw out the host’s egg or young in order to get the full attention of the foster parents. In this way the cuckoo can continue laying eggs in the nests of other hosts. 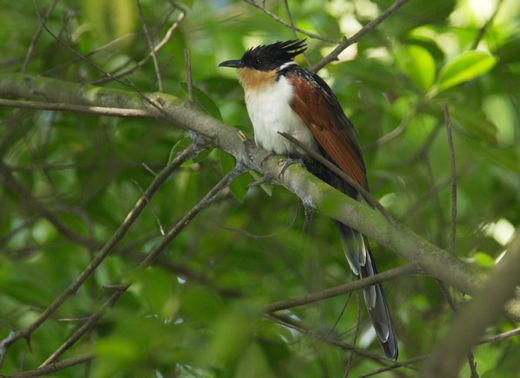