“It is rare to encounter the exact fledging moment of a nesting chick. To witness one emits a joy similar to that of watching your baby walking her first step. I had the joy of watching the fledging of a Coppersmith Barbet (Megalaima haemacephala) chick.

“This was the same Coppersmith Barbet chick that was observed with the strange behaviour posted earlier. There was hearsay from other photographers that there were actually two chicks seen in this nesting. However, one chick seemed to disappear 3 weeks after the first known sighting. What happened to the missing chick continued to be a mystery. The remaining chick fledged about 2 weeks after that. Hence, it can be deduced that this chick had probably spent more than 5 weeks in its nest. “On the day of fledging, a Sunday, the parents were, as usual, making sorties to deliver food to feed their chick (left). The feeding had slowed down considerably to as long as 20 minutes intervals. The chick continued its usual behaviour – checking out the surroundings by extending its head and peeping out from its nesting cavity from time to time.

“At about 10 am, the chick suddenly pushed itself out of its nesting cavity. It had fledged and commenced its maiden flight! And what a flight it was! As it shot out from its nest, it made a fast about-turn with wings flapping furiously before flying about 50 metres into a small tree. After weeks of confinement in its nest, the moment had arrived for the chick to free itself and explore the world.

“It happened so quickly that I was caught off-guard and could only watch helplessly as it flew away. I hurried to where I thought the fledgling had landed, quite certain that it was in the dense foliage. However, after searching for 15 minutes, there was still no sign of the fledgling. Its green plumage had indeed blended well with the foliage and provided good camouflage.

“I was about to give up and was walking away when the fledgling surprised me again, flying past in my direction at only 2 metres away, and at a low height of 2 metres. The flapping of its wings was fast and continuous, but its flight was slow. This time, its flight lasted for about 20 metres. I managed to pinpoint its landing spot on a low perch under a cluster of trees (below left). “It stayed on the perch quietly preening itself, stretching its wings, and looking around (above right). There was a pinkish patch on its crown that could now be clearly seen – it was flesh that was exposed due to lack of feathers. This bald patch had also shown up in my earlier photographs taken a week earlier. Parts of its body were similarly showing some pinkish flesh underneath its sparse feathers. Its feathers were probably still not fully developed. The fledgling remained there for about 20 minutes without making any calls. The adults were nowhere in sight, but must be anxiously looking for their missing offspring. Though fledged, the parents’ tasks ahead will be just as difficult. The fledgling will be most vulnerable at this stage and the parents will have to teach, guide, and lead the fledgling on its new journey in life.

“I realised that I was already late to fetch my daughter from her class and had to perform my own duty as parent. Reluctantly, I had to say goodbye to the fledgling. I did not have the luxury of time to wait and see its reunion with its parents.

“One week later I returned to the area. I can hear the familiar soft monotonous calls that I recognised as from the juvenile Coppersmith Barbet. I tried to look for it but its camouflage proved too good for me. I am glad just knowing the fledgling had survived its first week in its new environment.”

How long does it take for a cavity nester to excavate and complete a nesting... 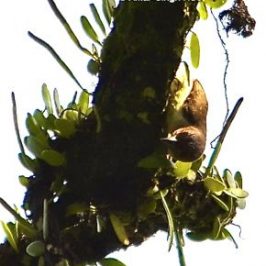 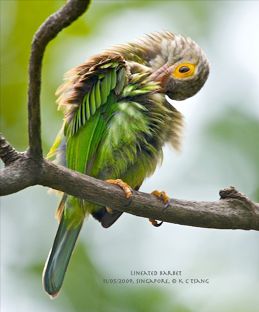 “Healthy feathers are a top priority for birds as this ensures their long term survival,...