A pair of Chestnut-headed Bee-eater (Merops leschenaulti leschenaulti), also known as Bay-headed was nesting in a cavity dug on a slope of a cleared ground about 30 metres from a disused mining pool. The area, near Chemor in Perak, Malaysia, was a sandy open ground with scrub cover. Trees were only seen nearer to the pool.

First sighted a week earlier, the nest was carefully monitored on 21st March 2010 from a distance of 20-30 metres away. Even then, Dato’ Dr Amar-Singh HSS had to have a crude ‘camouflage’ cloth over him in order not to distract the birds.

The adults were repeatedly bringing food to the chicks – dragonflies mainly, always with wings still on (above). On 29th March the chicks were still inside the nest and the adults were constantly delivering food, again, mainly dragonflies. Based on images taken from a distance, the dragonflies could be of the family Libelluilidae, possibly Urothemis signata and Orthetrum sabina, based on the brown wings and red, stocky body

The adults only approached the nest if Amar was at least 25 meters away and either hidden among the vegetation or inside his car. The birds appeared to be disturbed by the presence of the camera. Usually, an adult arrived with food and within 30 seconds the other would come. However, there were at least five instances during the 2.5 hours of stakeout when one arrived while the other was still inside the nest (above). The newly arrived adult entered the nest only to find its mate inside. It then had to back out, fly off temporarily to allow the mate to leave before returning to feed the chicks. This could be because of the presence of Amar. When observations were made inside the car parked at a distance, food deliveries were smooth. As soon as an adult arrived, it would call to alert the other inside the nest, who would then leave, allowing clear passage for the newly arrival to enter the nest.

On 3rd April, with the chicks now about 14-21 days old, it would probably take another 7-14 days before fledging. The rate of feeding, observed during one mid-morning (0830-1200 hours) when there were no disturbances and observed from the car used as a hide, is: mean 91.5 seconds (n=20, range=30-180 seconds std. dev.=61.9). However, whenever there was a disturbance, feeding could be halted for up to 15 minutes. The rate of feeding here is compared to that for the Blue-throated Bee-eater (Merops viridis) of every 30 minutes (Wells, 1999).

It is also possible that feeding regularity varies with the time of day and the availability of food, although there was no short of supply of dragonflies in the area. The final visit to the site on 11th April saw the chicks (at least two) with the adults in a tree about 30 metres away. This allowed detailed measurements of the nest and nesting site (above). Another nest was sighted about 5 metres from the first, not noticed earlier as it was hidden from view. Was this a new or an old nest? At the same time, a pair of Blue-throated Bee-eater (Merops viridis) in breeding plumage was seen around. Were they using this second nest? Or was this an earlier attempt to nest by the Chestnut-throated Bee-eaters or a new nest excavated to prepare it for a new brood?

The first nesting hole extends more than 0.5 metres into the ground, sloping downwards before going upwards. No attempt was made to probe with a metal tape for total depth as the nest could still be used after the chicks fledged (Connie Khoo, pers. obs.). The nest entrance, 14 cm from the top, measures 10 x 6 cm. The entire slope surface of the nest site has an incline of 5º and measures 32 cm.

The calls of the Chestnut-headed Bee-eater can be heard HERE. 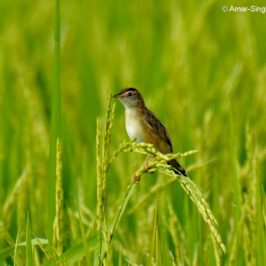 “The Ulu Dedap regions consist of extensive, large padi fields; as far as the eye... 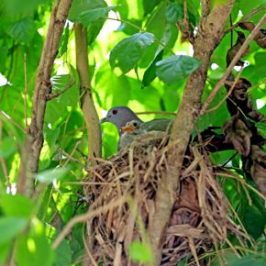