Hong & Cheng a.k.a. catspace were in Thailand around March 2010 and documented a family of Red-headed Trogon (Harpactes erythrocephalus) around their nest. An adult male brought a biggish stick insect to the nest, a large cavity on the side of a dead and rotting tree (above left). The chick grabbed the insect and managed to swallow it whole (above right). That afternoon the chick fledged.

The male of the Red-headed Trogon is the only trogon with a red head and breast. In the female, the head is olive-brown (left).

And as reported in Forshaw (2009), insects and their larvae feature prominently in its diet. And these include stick insects, cicadas, flies, beetles, woodlice and moths. Other invertebrates include millipedes and centipedes. The trogon also takes leaves and fruits. 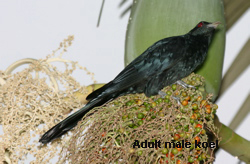 The Asian Koel (Eudynamys scolopacea) is a brood parasite. In Singapore the bird lays its... 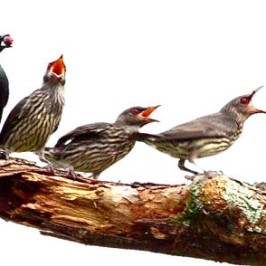