Howard Banwell was at Singapore’s Changi Business Park on Sunday 28th March 2010 when he encountered a female Brown-throated Sunbird (Anthreptes malacensis), also known as Plain-throated Sunbird. The bird was perching on a rotting part of a tree,

As Howard had his camera with him, he started shooting. It was only later when he examined his images that he realised what the sunbird was actually doing. It was pecking at a mass of silk but not flying off with the pieces for use as nesting material. In fact it was trying hard to get at some insects hidden among the silken mass.

Dr Leong Tzi Ming was consulted and he has this to say: “The silky mass could have been created by caterpillars of micro-moths, some of which spin loose, silky tangle around themselves when they pupate. The smart sunbird may thus have learnt that tasty morsels are to be found in the form of moth pupae, crispy on the outside, mushy on the inside.”

According to Robinson et al. (1994), larvae of Microlepidoptera or micro-moths that are detritus feeders “often web together scraps of dead plant material in bark crevices, while fungivirous larvae bore in dead wood or in bracket fungi. … Pupation occurs at the feeding site or close by… A silk cocoon is usually spun prior to pupation, and its form is characteristic in some groups.”

This is another example of the importance of images in birdwatching. The feeding behaviour was only realised after the images were examined. Binocular observation can provide some indication of what the bird was doing but the opportunity to seek expert opinion would not be there. 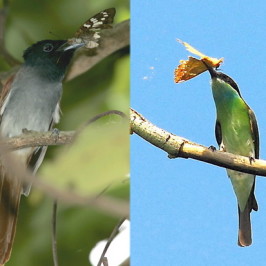