Birdwatchers mostly go into the field with a pair of binoculars to spot birds. The few who can afford it lug a spotting scope. But if you think you can depend on your eyes, you need not depend on any optics at all. But how about using your ears? Familiar with bird calls and songs is an advantage as you can then locate birds hidden among vegetation or are far away.

“I was in one corner of an area when I heard this growling and than barking,” recounts KC Tsang. “Now if I were not to know that this could be an owl, I would have given it a miss. So following the call, I eventually found my quarry.” Continues KC, “So in order to be a good birdwatcher, one should also get to know the different calls of the various birds.” Take the example of the song of the Indian Cuckoo (Cuculus micropterus). It has been documented in different ways by different authors of guide books. Robson (2008), the most used guide for the region, describes it thus: “Male territorial call a loud whi-whi-whi-wu or wa-wa-wa-wa, either with a lower last note or alternating high and low (may omit last note). Also a loud hurried bubbling (probably female only).” Strange (2000) has this to say: “A diagnostic, penetrating, 4-note whistle with the 4th note lower.” On the other hand, Lekagul & Round (1991) gives: “4-note whistle, ko-ko-to-ko (sometimes rendered as one more bot-tle) the third note highest.”

All the above authors agree that the song is loud and consists of a 4-note whistle, the last note lower. However, the rendering of the songs vary in the different publications, puzzling the not too experienced birdwatchers, if not even the experienced. And Robson (2008) hints that the female also sings.

Now listen to the recorded songs of the Indian Cuckoo as given in this link. The different songs from the different countries all show clear, distinct, 4-note songs, each a little different from the next. A sonogram of each allows one to differentiate the various songs. Obviously there are different dialects. Compare the recordings with the descriptions and you will appreciate the need to standardise the transcription of songs in guides. And obviously there is a need for more localised research on the songs and calls of the Indian Cuckoo, as with almost all other species of birds of this region. 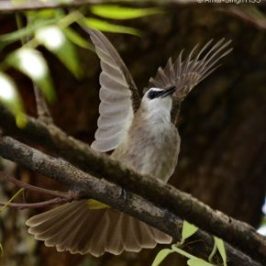 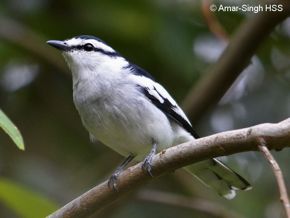 “Daily visits to our garden throughout the year by an adult pair of Pied Triller... 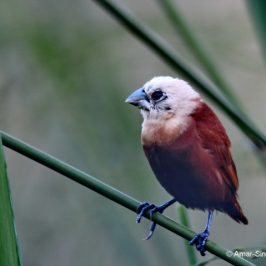