On 20th February 2010 Dato’ Dr Amar-Singh HSS chanced upon a pair of Paddyfield Pipit (Anthus rufulus malayensis) nest building (above) in a burnt grassy field around Ipoh in the Malaysian state of Perak. For two hours in the hot sun he made discreet observations from a distance of about 10m, using his camera mounted with a 500 mm lens to document the activities. No tripod was used so as not to unnecessarily distract the birds.

Wells (2007) reports that the Paddyfield Pipit nests can be shallow cups to fully domed, with variations in between. In this field the nest was dome-shaped (below right), built in a small unburnt area (below left). At the time of observation the dome was already built: width 12cm, length 13-15cm (longer than wide), height 9-10cm and oval opening 3-4cm diameter. Nest building was intense and furious. Both adults were then concentrating on the interior of the nest, one working harder than the other. Can it be that the female was doing most of the work?

Material used came from two nearby areas, about 7-10m away. Each adult collected from a different area. On average, the birds arrived once every 114 seconds, varying between 30 to 360 seconds. About 51% of the visits were within or around 60 seconds. There were two breaks to forage during the two hours observation, one lasting 6 minutes and the other 4 minutes.

When delivering nesting material, the birds flew to a spot 0.2-0.5m away and proceeded to the nest site on foot. This was possibly not to attract attention – a Brown Shrike (Lanius cristatus) was loitering nearby. A week later (27th February) the area was covered with lalang (Imperata cylindrica), the invasive grass that normally appears after a fire. The nest was then completed, made mostly with lallang blades. An adult was in the nest, its bill and part of the head visible at the entrance. When Amar approached, it flew off and did a “broken wing” stunt to draw him away from the nest. There were three predominantly brown spotted/sploched eggs in the nest that was at least 2-3cm deep (above left).

Another week later (6th March) the adults were still incubating the eggs. Three chicks were seen in the nest on 9th March (above right). Their eyes were closed and they were covered with natal down, the first feathers of the newly hatched chicks. Note the wide gape lined with swollen yellow flanges and the bottomless pit of a mouth with the tongue attached to the lower jaw. The gaping was in response to vibrations when Amar photographed the nest.

On 13th March the three chicks were covered with juvenal feathers. When Amar visited the area on 21st March, the nest was empty. The adults were on the roof of a nearby structure. They flew to the ground about 15 metres from the nest a few times and only returned to the nest when Amar left. The chicks may well have fledged and were on the ground nearby.

On 29th March, the 21-day old juveniles (assuming hatching was on 8th March) were seen feeding with the adults, one juvenile to each adult. There was no sigh of any third juvenile. The adults were very protective of their charge, one playing a dominant role, standing on a mound of earth, watching over the others. The part ‘swampy’ field, originally with a pair of Paddyfield Pipit, now has two pairs with the success of this breeding. 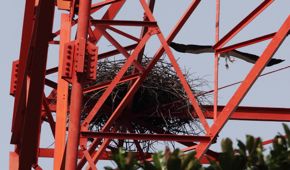