Danny Lau came across a pair of Rufous Piculet (Sasia abnormis) in the Panti forest in Johor, Malaysia towards the end of February 2010. He managed to video the male drumming on a rattan palm.

The male Rufous Piculet has a yellow forehead and is the smallest woodpecker around, smaller than a typical flowerpecker. “Observe how the small bird overcomes its size limitation by drumming as a communication tool in addition to calling (relatively soft) to locate or contact his mate,” writes Danny.

In the video, the loud drumming comes from a cell phone playback, loud because it was close to the recording camera. The piculet’s drumming was very much softer because the bird was slightly more than 10 metres away. However, his drumming was distinct to Danny.

With his mate on the opposite side of the track, he was trying to communicate with her by drumming on the rattan’s stem. He was seen moving around the stem, probably to locate the best spot to transmit his message.

Drumming on bamboo stems produce a loud resonance. Palm stem on the other hand is less resonant, but then that was the best then available.

Both sexes are reported to drum, although the male drums more frequently. The drumrolls may differ between the sexes in some species but whether this is so in the Rufous Piculet is not reported.

The image is a video grab. 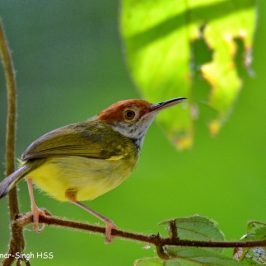