“The Black-headed Bulbul (Pycnonotus atriceps caecilii) is always delightful to see as it is, of the common jungle bulbuls, an unusually coloured bulbul (apart from the highland Black-crested Bulbul (Pycnonotus melanicterus caecilii). However, taking pictures is not easy as it prefers the higher canopy and is generally shy.

“It is reasonably common in all the lowland forest reserves around my city (Ipoh) and often in flocks of 5-7 birds. Most of the time you will hear its definitive ‘chirp’ with many replies and repeats. The intensity increases with anxiety as you approach them.

“Was fortunate to come across a fruiting Ficus benjamina with ‘swarms’ of various bulbuls and many Black-headed Bulbuls (possibly numbering 15-20 – hard for accurate estimates as a lot of coming and going). Watched over three visits, on 9th, 12th and 14th February 2010.

“The bird swallows the fruit whole (above). Occasionally have seen some birds struggling when the fruit is larger and have to make a couple of attempts to swallow. Another way to capture the fruit is to flutter until they find a ripe one, then snatch it in midair (below). Not an uncommon method used.

“The bulbul will also hunt for spiders and other insects.

“Although the head, throat and nape are described as ‘black, glossed bottle green’ (Wells, 2007), I have often seen a metallic blue sheen to the feathers. Most notable at the nape and throat.” 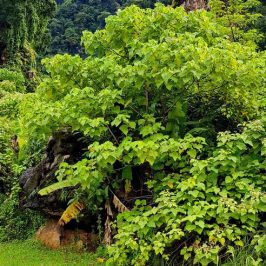 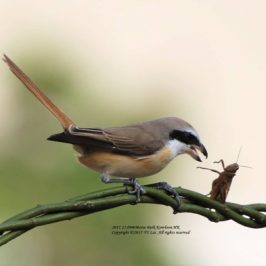