“Although I try to get opportunities to go out to watch birds, often our home is full of action and drama. Currently a number are nesting or have young in the garden – the Yellow-vented Bulbul (Pycnonotus goiavier analis) have two young, the Scarlet-backed Flowerpecker (Dicaeum cruentatum cruentatum) are nesting in the Tamarind tree, the Pied Fantail (Rhipidura javanica longicaudata) have built another nest in the Cinnamon tree and have eggs, Asian Glossy Starling (Aplonis panayensis strigata) are feeding their young also in the Tamarind tree. “In the past week I have noted three episodes of angry and frantic calls involving all the chaps above and also the Oriental Magpie Robin (Copsychus saularis). Each time it is because a male or female Asian Koel (Eudynamys scolopaceus malayanus) has turned up in the Tamarind or Cinnamon tree (left top). Everyone would gang up together to shout out their displeasure and some would even try to dislodge the Asian Koels by flying at them, especially the Pied Fantail (Rhipidura javanica) who are very concerned about their nest (left middle, with inset showing its ruffled feathers). It is amazing to see the cooperation, a small Scarlet-backed Flowerpecker (Dicaeum cruentatum) working with the fantails, the Yellow-vented Bulbuls (left bottom, showing the raised crest), etc. A surprise was the involvement of the starlings.

“Like the birds who seem to know that Asian Koels are parasitic, I have no love for them and will assist in showing displeasure. Although Asian Koels are supposed to brood parasite the Jungle Crow (Corvus levaillantii) and House Crow (Corvus splendens), in Southern Thailand and Malaysian Peninsula, Koels are stated to have shifted host from crows to mynas (Payne, RB 2005. The Cuckoos. Oxford University Press). I have seen them check out the nest of many other birds but have yet to see them use them.

“Note: I only really notice Koels in any number in my city in 1991. In the past 20 years they have been extremely common. The House Crow on the other hand has only been noticeable in the city in the past seven years and even now are not large in number in the city.” 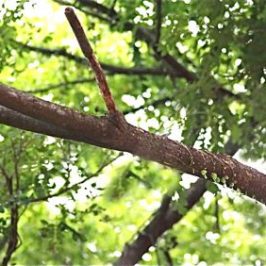