On numerous occasions Lena Chow observed two male Asian Koels (Eudynamys scolopacea) in a “standoff” – eyeballing each other for long periods, and making soft “wook wook” calls, unlike their usual loud “ko-el” calls. On one occasion she saw three male koels in a 3-way standoff. By the time she got her camera, one of them had flown off, leaving the other two (left).

On the afternoon of 3rd January 2010 there was a similar standoff. She tried her hand at filming the birds with her compact cam and at the same time recording their calls. You can view the video and hear the call HERE. 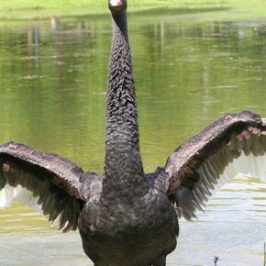 “The Black Swan (Cygnus atratus) is a large waterfowl that was introduced to the lakes...