“I had a brief encounter with what I suspect to be a Chinese Egret (Egretta eulophotes), listed as globally threatened and an uncommon winter visitor in Singapore. As I’m just a leisure photographer and seeing this species for the first time, would appreciate verification and confirmation from the experts.

“It was low tide last Sunday morning. I was at an exposed stretch of mudflat along the coast, indulging in my hobby of avian photography. There were several birds foraging in the distance; mostly Little Egrets (E. garzetta) and a Grey Heron (Ardea cinerea). Engrossed in capturing images of the Grey Heron, which was having some difficulties swallowing a huge fish, I did not pay much attention to a solitary bird which had suddenly appeared in my camera’s view finder. I presumed that it was one of the Little Egrets, which were rather common around the area.

“After observing the heron finishing off its catch successfully, I became aware that the bird, which had earlier blocked my view, as it was between the heron and me, was definitely not a Little Egret. Its legs were yellowish-green in colour while the Little should be black. Its upper mandible was mostly rust colour and its lower mandible mostly yellow for about two-third of its length. The Little’s mandibles should be black.

“A crest was also observed, albeit not all the time, swaying occasionally when caught in the gentle breeze. The difference between the egrets became more apparent when one Little flew above the suspected Chinese and landed nearby (above left). The Chinese reacted by raising and displaying its prominent crest. Images of the two egrets captured together showed the two nape plumes of the Little Egret being less conspicuous than the prominent ‘headdress’ worn on the head of the Chinese Egret (above right).

“Shortly after, another Little walked past the suspected Chinese. This provided an opportunity to compare sizes of the egrets. Even though its distance was further from the camera, the suspected Chinese Egret looked larger than the Little Egret. A brief display of plume feathers from the Chinese occurred as the birds walked nonchalantly passed each other.

“The encounter lasted only a brief 10 minutes with the suspected Chinese taking off and flying away.” 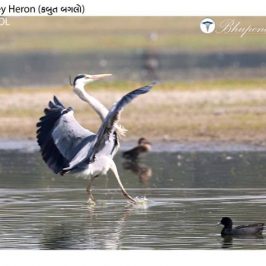