“I have seen parakeets visiting mangrove trees occasionally and observed that they seemed to be plucking leaves from the trees. They were often high up or hidden in the foliage. Hence, it was tough to get a clear view or to capture good photographs. “Recently, I had better luck and managed to capture two different species of parakeets in a series of photographs on two different days. I’m surprised to observe the Red-Breasted Parakeet (Psittacula alexandri) (above) and the Rose-Ringed Parakeet (Psittacula krameri) (below) eating fresh leaves plucked from mangrove trees! From my observations, they shared the same technique of gathering and eating the leaves. “The parakeets usually visited the mangrove trees early in the morning. They were observed to use their beaks to expertly pluck the mangrove leaves, detaching them from the branch at the stalks. The bird will then raise one of its feet to delicately hold onto the leaf with its claws. The parakeet will proceed to bite off and chew the leaf starting from the stalk. The leaf will be minced bit by bit in its beak. Occasionally, the tongues of the birds could be seen probing and tasting the minced leaf (or could it be tasting the sap?). The leaf will not be fully consumed, but will be discarded after only a few bites.

“The parakeets seemed to like only the section of the leaf nearer the stalk as that was the only part that was consumed. It was noted that only a small portion (less than a quarter) of the leaf would be eaten. The parakeets will drop the partially eaten leaf from its claws before reaching out to pluck a fresh leaf. It will then continue eating the next leaf in similar fashion. After eating a few leaves, lasting less than 10 minutes, they will have their fill and leave – probably to seek their main course.

“It is really a surprise to see parakeets eating mangrove leaves. Is it part of these parakeets’ normal diet? Or perhaps it could be a thirst quencher?

“The next time you see leaves dropping from mangrove trees, look up and you may be amazed to see the parakeets feeding on the leaves. Would appreciate some light on this eating behaviour.”

Note:
Parakeets feed on fruits, seeds, pollen, nectar and flower petals. Collar (1997) reports macaw eating leaf petioles and mature leaves while Juniper (2003) lists the diet of parrots to be mainly plant parts – seeds, fruits, flowers and their buds, nectar, pollen, leaves and sometimes bark. Wai Chong’s observations of the Red-breasted and Rose-ringed Parakeets eating mangrove leaves is a new food record. Can the parakeets be aiming for the salt in the sap? 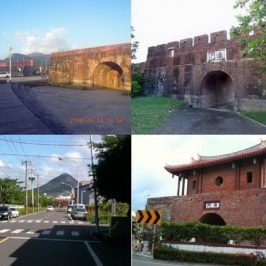 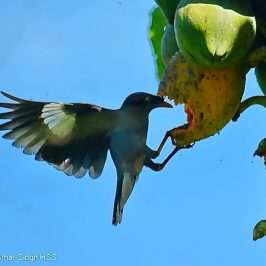 The papaya (Carica papaya) is commonly planted in many urban gardens as the fruits are...