Danny Lau Weng Thor documented a Chestnut-winged Cuckoo (Clamator coromandus) at the Western Catchment on New Year Day with a large ‘thorny’ caterpillar in its bill. The cuckoo was manipulating the caterpillar by swinging it vigorously in the air. At the same time the bird was passing the caterpillar along its bill a few times. This was to rid the caterpillar’s stomach contents before swallowing it.

You can view the video HERE.

The video and image were passed to Dr Leong Tzi Ming who confirmed that the caterpillar is that of the Privert Hawk Moth:

“Yes, I’d agree with you that it’s a Psilogramma sp. caterpillar (family Sphingidae). However, I’d like to rectify the misconception that this caterpillar is spiny. In fact its body is actually quite smooth, although its tail horn does have low spines.

“The video clip was a good documentation of how methodical this Chestnut-winged Cuckoo is. It must be a Methodist, I guess.

“The cuckoo was actually systematically squeezing the gut contents/faeces out of the caterpillar, working from its head towards the posterior, expertly manipulating the caterpillar with its slender bill.

“This motion effectively flattens the caterpillar (from 3D to 2D). This is analogous to squeezing toothpaste out of its tube, but using chopsticks instead! The cuckoo also does a thorough job by grabbing the caterpillar by its head, and flinging it against the branch, employing centrifugal force to remove any traces of unpalatable gut contents from its prey. This is analogous to washing dirty socks/stockings and flinging it upon a hard object to remove excess water before hanging out to dry.

“Cuckoos are certainly a lot smarter than we assume. So the next time someone calls you by that name, take it as a compliment.”

“Recently, some Red-Breasted Parakeets (Psittacula alexandri) in a flock were encountered foraging on a medium-sized... 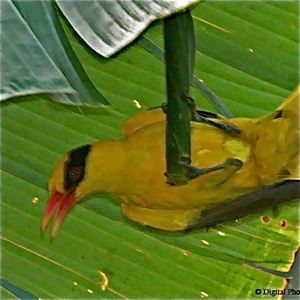