Ding Carpio from of the Wild Bird Club of the Philippines encountered an Osprey (Pandion haliaetus) carrying twigs on 19th December 2009 and again on 2nd January 2010.

“I noticed in two out of three recent trips to the La Mesa reservoir a peculiar behavior of an Osprey. It picks up a rather large stick/branch and flies around with it (left top). In both occasions, there were other Ospreys darting about. On the second occasion, another Osprey was apparently attacking (or playing with?) this stick-bearing Osprey,” wrote Ding. “…we actually saw the Osprey fly to a treetop and snatch off the branch (left bottom).  Is this some part of a ritual? Or does an Osprey really bandy about a stick before taking to its nest-in-construction?”

Ospreys usually build their nests in tall trees, especially emergent trees that are dead and with broken off branches. The nest would thus be fully exposed, with the raptor having a clear view of the surroundings.

The nest is made of large sticks, twigs, driftwood and even seaweeds. New materials are added throughout the breeding season and as the nests are reused year after year, new materials are added. With time the nest may become a huge structure, sometimes becoming two metres deep.

Both sexes help in nest construction. They start off with large sticks, forcible breaking them off trees and flying off or picking up the sticks should they fall to the ground. These birds are sometimes robbed of their sticks by other Ospreys. 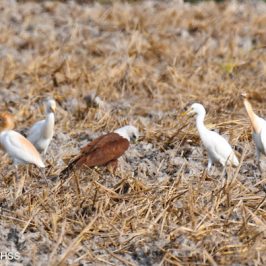