“I’ve heard the subdued songs of a flock of White-crested Laughingthrushes, like they were whispering/whimpering to each other, most unlike their usual loud garrulous selves. Wonder if anyone else has heard this? I did a random search on the net, and found this article, suggesting that this quieter song could be their contact subsong,” writes Lena.

The article referred to by Lena is by S. Chinkangsadam & N. Sitasuwan of the Department of Biology, Chiang Mai University, Thailand. The two researchers studied the vocal communication of these laughingthrushes, recording their vocals to generate sonograms that were used to analyse for song patterns.

Two types of vocal communication were found, calls and subsongs. Subsongs are shorter and less complex in structure than true songs. Unlike true songs that are used to defend territories and to attract mates, the two subsongs detected in this case were used in mobbing other flocks or species that approach food source and to keep in touch with one another in flight and during flocking. The four types of calls detected were for alert, alarm, excitement and begging.

The soft ‘song’ that Lena heard may well be a contact subsong. 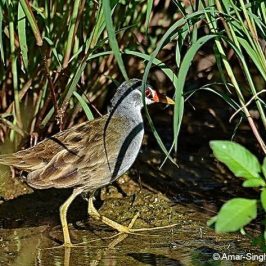 “The calls of the White-browed Crake (Porzana cinerea) (above) are inadequately documented in my region...