“On Sunday, 6th December 2009, while conducting a survey along the Sungei Ulu Pandan, Serin Subaraj and I observed a Grey Heron (Ardea cinerea) fishing along the bank. “I managed a few photos of its method. It would wait patiently until its prey came close enough. It would then stab at it and if successful, it would then adjust its grip of the fish in its bill (above left). It then seemed to wash the fish (above right) before swallowing it (below left). Finally, after fully swallowing its prey, it dipped its bill back into the water (below right). I was not too sure whether it was washing its bill or having a sip of water. “The Grey Heron populations in Singapore fell drastically in the early 1990s, after the destruction of their nesting grounds in Kranji (to make way for the TCS station). However, due to successful breeding in Johor, Malaysia, they made a comeback in the late 1990s and continue to be successful, due to a couple of seemingly safe breeding colonies being established locally in recent years.

“Today, this heron can be seen in many parts of Singapore, to be appreciated by both naturalist and layman alike.”

Note:
An earlier post showed a Grey Heron similarly washing the fish before swallowing it. It the dipped its bill into the water five times to drink before moving off. 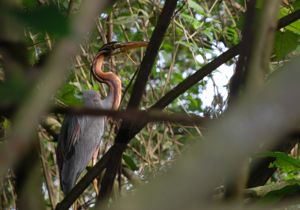 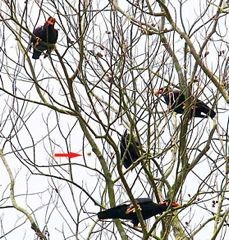