Mike Tan a.k.a. woof encountered a Coppersmith Barbet (Megalaima haemacephala) excavating a roosting-nesting cavity in November-December 2009 (above left). The small cavity in the tree trunk was significantly enlarged within a fortnight as the barbet worked furiously at it (above right). Once the cavity was completed, the barbet returned nightly to roost in it (below left). Ownership of a nesting hole does not last long in Singapore where there is a shortage of such cavities and competition for occupancy is intense. After all, very few birds are capable of creating a fresh nesting cavity. And natural cavities are few and far between, considering that old and rotting trees are constantly being removed in urban areas. In the forest such trees eventually collapse.

Before long the Coppersmith Barbet was evicted from the cavity it excavated by a pair of Asian Glossy Starlings (Aplonis panayensis). The starlings were seen cleaning up its newly acquired home (above right). 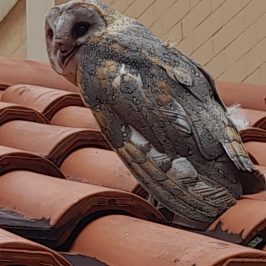